As a soft rain falls on a Sunday and May flowers come into bloom, NC Amendment One brings the bully pulpit ever closer to the voting booth on May 8th. Sure I’m all up in arms a little late about finally getting hitched after 23 years together, but come to find out the Church has conveniently forgotten their history (maybe we should put it in a book). It was the Enlightenment that gave birth to America, the Age of Reason, with secular referencing all around.

And, despite paying no tax at all, the Church is now invading the very lawbooks I support with mine, to the extent of excluding me from whole package of rights they think they can better “define” for the courts – not cathedrals. Different pews, priests! Different pews!

You see, I’ve been such the fairy fool. Distracted by the cause.

Of course, keep secular this Republic. But really, I could give a shit whether you throw rice at the tail end of my departing Subaru, trailing tin cans on strings with signs that say civil this or union that. Something much more sinister is afoot.

There’s a much more subtle homo in the homily, my friends – and we’ve all missed it, yapping about God so much at Town Hall lately. This latest and most audacious rift of Church forgetting forefathered fences and flat-out making up history is drowning out the sound of Nero’s fiddle with a cacophony of ignorance meant to divide and conquer what last remains of the Republic, a beholden piece of paper signed by visionaries and not priests or pope. 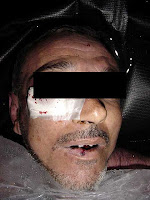 So here it is.

Better than a bunker buster. Missiles that go right for the tiniest of holes. Drones that do not fly, and make the “enemy” walk down on all fours instead.

In Cuba, just on the other side of the very same island we outlaw with sanctions of economic scale, we began to see the picture emerge. Pictures, more accurately. A prison camp with no prisoners of war, but filled to the brim with “enemy combatants.” We went from twin towers falling to Nazi Germany in a matter of weeks, complete with rabid attack dogs, leashes for human beings held in American hands, and a lot of saran wrap apparently… 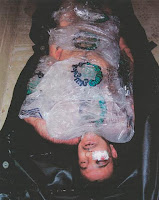 What we saw was a disgusting example of moral decay so purely evil we had to give it a cutesy Sesame Street puppet name that sounds nowhere close to the Bay of Pigs geography for where it really sits defiant against Geneva, opposed to basic human dignity, and absent all due rights of man.

What we saw was an irremovable collective retina burn of ‘wish you were here’ vacation photos from our soldiers stationed oversea. Here’s how it works.

Being gay is so hated, so hurtful, so poisonous to the civilized mind … that it is now the greatest military force in the world. Oh sure, we may argue over Iran (they hang the homos there) and the possibility they might go all Hiroshima or Nagasaki out there on Israel, but really the joke’s on us here at home rallying for the very Plutonium Pride marches each every June. The laughing must be deafening in a Pentagon pushing up pansies.

Shame, humiliate and break the enemy into submission just by making them be gay. If only they could choose! Yes, it's true… gay is so bad that it makes 'em talk, every time. Hoods, collars, and gay rape. Suffering and sadism.

Aimless young recruits devoid of compassion, laughing as they make Muslims piled up in pyramids taste the most vulgar of their sins, all while kneeling and crawling before the American power -- and worse, documenting it for all the world to see forevermore. This goes so far beyond the depravity of war.

This intrudes on ancient holiness. It cannot go away now, ever be forgotten. It is a new sort of atom bomb, for it still kills souls and maims people for generations with its own kind of ever-expanding radiation today and half-life for a long, long time to come, even though it happened way back just past nine eleven or so.

Think about the terrible irony and intentional trickery of all this while here in the Homeland, raging queens on TV dressed up hopeless straight men like preschool rag dolls and everyone raved with the rating's full approval. Or, think about the closet Gleeks who just love the songy sweethearts when they kiss, and the undying friends who pass right by lockers to defend them in the halls.

Think about the insult of all of this for me now when it's referendum rally-ready to go LEGAL for gays to get hitched. Yes, it's true… gay is so home down good now, it made primetime TV thrive and then went right to the wedding ceremony from there. Big parties. Big shows. Big boulevards full of drag queen bows.

A certain kind of camp.


So as a gay guy, I’ll say it, a generation out, this tale of two cities of truth has me deeply worried, for it means an entire nation is saying one thing while doing quite another to people elsewhere in the world. Or doing many things while saying not all that much publicly. Either way, though, I'm seeing both sides of America’s moral mouth moving along the harmonica of politics, feigned acceptance, and endless war.

Not everyone likes gays, don't get me wrong. But don't let us fool you, despite longtime partnerships and love and lovely homes, being gay does still mean having sex with other men no matter how you slice it up. Either it's dirty or it's not. On the cleaner side of things, you have to admit we do endorse it with tolerance and some annual parade toward Pride. We endorse it even further in some kinds of church. God knows, the Church organs have been pulsating as certain ministers and priests alike have seen to their fair share of fair young flocks.

And now? We let the lawyers in. And the statesmen too. The corporate sponsors. The bigwig bigots now retired changing word. The IRS? The list goes on, except for eHarmony maybe. All official. All accepted. All right with you and me.

But wait, there’s more than Gitmo that hits the eye (and blackens it). In Syria, for instance, and pretty much everywhere else the people rise in spring to western Democracy’s call, murderous mercenaries and slimy soldiers take to rounding up and brutally raping all the men in tiny villages, pants down and batons up right in front of wives and children -- just to spread the terror of wanting change around.

Funny. Here, we call that AIDS. The only disease they actually put the word “acquired” in, as if all others magically manifested from thin air.

I am a weapon now, not a newlywed to be.

And not just in Middle Eastern desert towns. Here. too, hopeless, painful tides run deep underneath the Broadway show. All of this while we're about to fall headlong into the debate of the century. The self-proclaimed gay pride month of merriment awaits no matter the outcome of voting, complete with its corporate beer-sponsored parades. Same old labels, you know, just with triangles.

Gay's like that, though. Every time you see it out loud it's all a great big show, and there are always a lot of people laughing at it anyway in one form or another. Pointing in pictures, even. Where did we see that before?

So as the clock ticks and the tallies count, I really think I'm two gays in one. There's the queer me that's more legal every day, legitimate even; and then there's still the depraved faggot one, disgusting whole nations at a time with the acts that have to go along for the rise. In a Polaroid or on a wedding license.

A tale of two truths, no? Will no-one say it?

Either it’s queer or it’s not. The norm or something stranger. Disgusting, or duly free. But it can’t be both. I can’t be both. To force my suffering lot in life onto other men who are not compassed for other men is wrong. Morally so. I dare say, even a sin.

And we will all pay for this somehow. I just know it, because when the Male and Female aspects of divine Nature become one bitching Hermaphrodite, He-She’s going right for the submissive tops. The ones with rockets in their hands. And suspects to kill.

I didn’t ever choose to be gay, I chose not to lie. Brutal armies chose gay. Let me hear you tell them how wrong they are. Problem is, nobody – oh nobody – will ever cry out to tell this hopeless humanity to stop using the Faggotry as some kind of infantry, some kind of mask in the Endtime’s play, hiding still the dark recesses of the human heart. The camel through no eye of a needle on the way to Heaven.

Not supporting war is one thing. But how the hell can I not support being gay?