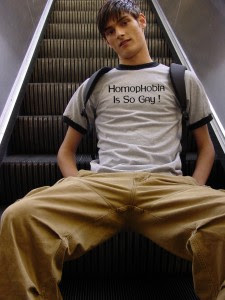 I am so tired of homosexuality being discussed as a MORAL issue. It's simply not. Who are you to say it is anything at all in the first place if you're not even gay? Morality has to do with how one leads one's life according to some tenets or dogma, whether it be right or wrong, pure or filthy. Forcing the issue into morality, religion, and even so called "nature" is putting outside the container before looking at the contents. Let me put it another way:

That's how the entire "civilized" world looks at this issue -- through a glass obscured with writing and regimen. Absurd! Of course I see the Grand Design in the special parts on boys and girls. But even in "nature" certain species regularly engage in some homosexual behavior. The thing is, if a male engages in sexual activity with another male he is doing it because he feels an urge of some sort; it may be love, it may be lust, but let's all agree it's a FEELING and NOT a choice like let's have McDonald's or Burger King.

Better put, of course, is it's an orientation. Direction.

Besides, who would choose it? It just doesn't make sense. When they lock up guys n the slammer, perfectly straight guys engage in homosexual activity. Well, were they always gay? Are prisons giant gay factories? Or isn't it more likely that the male beast simply has urges and society has rules on these urges? Once out of that society and forced to cohabitate with other males, it happens.

More likely this whole thing has to do with sex itself and how it's "supposed to be" done: male dominance, institutional patriarchy, and the fact that men always "wore" their pee-pees on the outside once they stood and walked upright.

God forbid another one gets on his knees and remembers being true to his calling.

I love your homo voice. You really have a great way of addressing those core issues that people can get stuck in. Keep hammering the meta-phors and eventually everyone will get it. Then we can all take that overdue, collective, step up to the next rung on the ladder. You should write on queer stuff more. Your voice can reach those who can't hear.